Based on ideas previously explored in #3588 (and PR #4659) and recently discussed via @mtias in https://make.wordpress.org/core/2019/09/05/defining-content-block-areas/ (see also particularly this comment by @westonruter), let's further specify how today's paradigm of hard-coded theme template files can transition to enable full-site editing using blocks.

There are two major technical pieces needed for this:

Based on these two pieces, several UI decisions need to be made on how to expose these features to the user, and we will likely need some iterations to get this right. While we'll out of necessity probably touch on some of those ideas here, I suggest we focus on finding a solid under-the-hood solution first.

Based on this, a few further thoughts:

Since we already did some Full Site Editing work on WordPress.com, I’ll try to convey some of the things we’ve tried so far and some of our takeaways. I’d like to preface that with a comment that our work was intentionally scoped down for two reasons:

During our work we experimented with a couple of approaches:

We ended up using (3) in the end, because it seemed like the most seamless way to get what we need for our scoped-down solution. While this worked for us, it’s not necessarily the best long-term approach for Core, but some pieces could still be reused. This code now lives in:

Our initial template data population happens on after_switch_theme hook, and this can work regardless of the final data storing approach. It provides a way for each theme to register its own specific template data. In order to avoid duplicating this code across all themes that want to support FSE, this functionality is now implemented in FSE plugin, but it seems like something that could be incorporated into core down the road. As a side note, we also attempt this on plugin activation, to cover the case when FSE supporting theme is already active. Overall it follows these steps:

In our case the benefit of (3) is that we don’t have to release a new theme version if we want to publish a fix or update to template data.

As a result of (2) and (5), it’s possible to preserve existing customizations to template parts across theme switches. For example, if you want to just try out a couple of new themes on your site, and then revert to your original one, the previous theme specific customizations to your header would be restored.

For storing the data, we are now only using wp_template_part CPT, but that’s just because our solution didn’t require more. When we tried to envision what core is going to do and align with that a couple of months ago, we leaned toward the wp_template and wp_template_part split, as opposed to just wp_template CPT with hierarchical taxonomies. To clarify, both options seem viable from the implementation standpoint, but it seems like the former requires less wiring, might perform slightly better, and could better aligns with existing WP concepts and infrastructure. Some benefits in my opinion:

While all of the above can easily be worked around, they might hint that we are trying to clump together two conceptually different entities under the same roof, and we might discover additional work on account of that down the road too.

It seems to me like the model would become much simpler if we enforced no nesting of entities of the same type, both for wp_template and wp_template_part. So page template could only contain template parts, and template parts would in turn be composed of static, dynamic, and reusable blocks. I’m still not sure if this is too constraining, and it definitely requires some more thought. So something along the following lines: 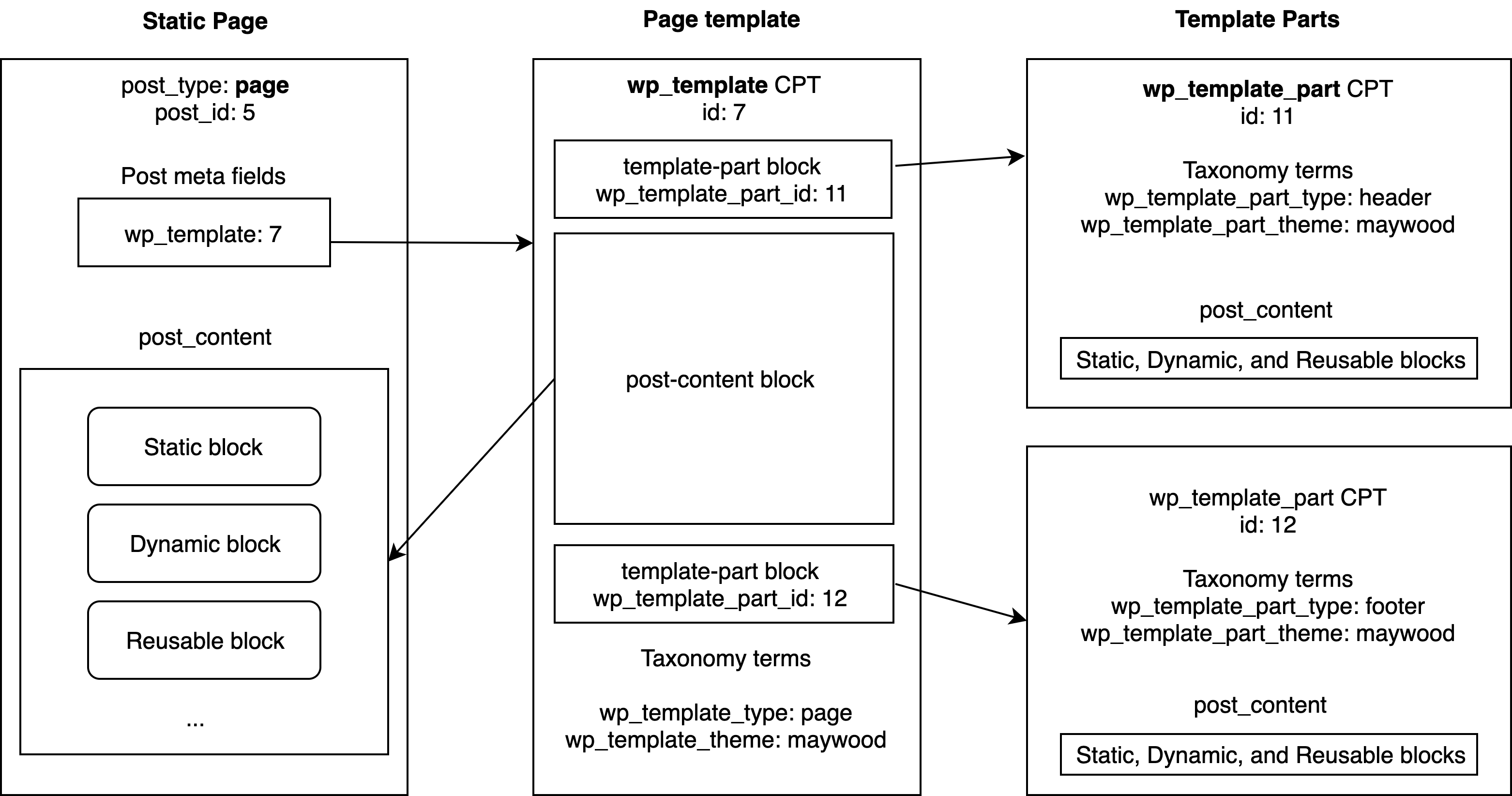 P.S.: I tried to condense this as much as possible, but it still turned out a bit longer than expected - sorry about that. :) If anything is unclear because of that I'd be happy to clarify. Also, if there is any way that we can further help the core FSE work based on what we currently have on WordPress.com (be it feature testing or user feedback) feel free to let me know.

Kudos to @Copons for reviewing this and suggesting edits.

If I may chime in, as a person who worked hard on the WordPress.com Blank Theme experiment, and struggled immensely in explaining it to peers and stakeholders alike: we desperately need the best and clearest terminology we can come up with.

wp_template, wp_template_part, template hierarchy, template files: it's painfully obvious to me that the "template" word is overloaded of meanings!

I don't have a good answer, and I know this seems like bikeshedding, but if we manage to figure out some unambiguous terms, then FSE will become 100% easier to discuss, and the project itself will move forward quicker.

When creating a wp_template post, then you could decide to use one of the theme-provided templates block data as the starting point. Something like what @jeremyfelt shows in a tweet.

We may want to consider keeping track of which theme was active when a given wp_template post was created. While ideally all themes that support wp_template should be able to simply swap out the template, some themes may have stylesheets that expect certain template block configurations. If the wp_template posts were tagged for the active theme, then it could provide a way to filter the templates based on this. This comes to mind based on the Additional CSS feature in the Customizer, which stores CSS in a custom_css post type, but the CSS is theme-specific so each theme gets their own dedicated custom_css post. We were thinking at some point to provide a way to import CSS from one theme into another, and a similar idea may apply here for templates. In any case, the default case for wp_template posts is that they should persist by default when switching themes.

Most of the architecture work for this issue has already landed. I'm going to close this issue now, let's focus on smaller targetted issues now.